Ichigo is excited by the prospect of her father, Taichi visiting home and finally getting a chance to see her perform. But after he is requested to return he is forced to make a tough decision; risk negotiations by missing his meeting, or disappointing Ichigo.

Johnny begins class by telling the audience a story- only for Orihime to interupt by commenting on how high-and-mighty he sounds due to it being April Fools day.

Taichi arrives home and Ichigo expresses surprise. He apologizes for showing up so suddenly before being reminded of the holiday as Ringo mentions dinner. He is really hungry, deciding not to eat while on the plane since he wanted his first meal to be with his family, and Ichigo and Ringo head off to prepare it while he plays with Raichi. Initially Raichi hesitates, claiming not be a child anymore- but he is unable to resist and allows his dad to lift him.

Everyone sits down to eat and Taichi compliments Ichigo's cooking, voicing how much it has matured. Ringo takes away the dishes once they finish and he begins to fill everyone in on his work. He spends his time traveling the world in search of special flavors that are very rare, and after hearing the rumors of a miraculous fruit hidden deep inside of the jungle, he headed there to find it.

He found himself face-to-face with a Puma soon after arrival, but he ran away and escape by diving into the water, swimming to the opposite side of the area. He was swarmed by a group of crocodiles and forced to run away. He used the crocodiles to reach the other side of the river- a detail that leaves his children impressed. He goes on to discuss the miracle fruit and takes it from his pack to show them the Stargrapes. Everyone tries one and are delighted by the flavor, but he explains that there is a problem. The villagers of the fruits origin village are very protective over it, and he requested from the leader to take some of the fruits back home so that everyone could enjoy them. The leader was so angry he made him leave, despite Taichi's attempts to reach through to him. However, they did allow him a single bunch to bring home as a gift.

Ichigo then asks if they can really eat the fruit, now knowing this information, but Taichi insists that it is fine. They get up to watch some television when a commercial for the movie Ichigo and Otome were in plays. He is very impressed while Raichi shows him a picture of Aoi, and Ichigo asks her dad how long he will be home, bringing up a Live audition she will be participating in. When he reveals his plans to stay until Spring Break ends, she asks him to attend- only for her to suddenly get a text from Aoi reminding her of their practice. Disappointed, Ichigo expresses displeasure until Taichi offers to come with her in order to spend more time with her and meet her friends. She is very happy, and when he sees now disappointed Raichi is, he promises to play with him when he returns.

At the school, Taichi meets Johnny and Orihime and the trio of adults share casual discussion. They walk around the halls and come to the room with Statues of the top students of the school, where Taichi comments that it feels strange calling Orihime a Headmistress now- having been a big fan of Masquerade.

Later, Ichigo's friends curiously observe Taichi and he thanks them for letting them stay and watch. They get to work while Johnny stands by to offer tips and advice until they begin to bicker or something. After Ichigo nullifies the argument they resume, with Taichi happy to see them get along despite being so different. He goes on to compliment them as they come to a stop soon after, with Yurika deciding to leave since she needs to recover from the "sun exposure". He is confused by her odd behavior until it is explained that she is in character, and he is very impressed, asking to shake the hand of Dracula's descendant.

By now the girls are beginning to question if he was telling the truth about finding a yeti earlier, and Ichigo asks her dad to tell them about the time he befriended a bear. He ran into a hungry polar bear and fed it the food he had on hand, and in return it helped him out. Otome is very impressed- but the girls remain doubtful. Aoi then goes on to mention that because it is April Fools Day, she believes he might just be making up stories, and with that Taichi decides to leave in order to hang out with Raichi like he promised.

Later, Ichigo returns home to find them playing soccer. They got so deep into the game that they didn't even realize the time, with Ringo coming by to mention the bath she prepared for her son and husband. They head off to enjoy it.

That evening, Raichi and Ichigo are fast asleep when Ringo notices that her husband is still awake. She sees that he is looking at a picture of the village children he took before he left, and he feels badly for them because there is only one school there and it takes several hours of trekking in a dangerous forest just to reach it. This makes Ringo feel sad as Taichi mentions that he cares for the people in that village, and he was hoping that they could have spread the stargrapes around in order to provide money to make a closer school for them.

Suddenly, he gets a call to inform him that the Village Leader has began to reconsider his earlier decision. It is of last minute, but they can set up a discussion if he would be willing to return now, and the Elder is only willing to speak to him. They inform him that due to his ever-changing moods; he is on limited time to get there and do this. Taichi is left feeling frustrated by the news, deciding that he has no choice but to agree.

The next morning he is busily packing as the family wishes him luck. He feels remorse but Ichigo assures him that this is more important, hoping that he will do his best after promising that she will. He takes off soon afterwards.

At school, Aoi explains what happened to the others and Ran points out that he won't be able to make it back in time. Ichigo is very depressed by the news and is off in one of the corners looking out the window as Yurika wonders if maybe his yeti and bear stories were his only lies. But to the groups surprise, Ichigo suddenly perks up and wishes to get back to training.

Meanwhile, Taichi has reached the forest and the elder of the village. He is taken back by how quickly Taichi made it, and he claims that his promise to Ichigo was what pushed him to keep going.

As the girls prepare for the concert they share some words before they go to change coords. They appear on stage, and right before they begin, Ichigo is shocked to find Taichi in the audience- just making it into the packed room. With a renewed spirit, Ichigo and the others begin performing Calendar Girl.

Upon finishing, Ichigo runs straight to her father to announce she and the others passed. Raichi asks how Taichi was able to make it back so quick, and Taichi explains that the Elder scolded him for coming to the Village after making a big promise to Ichigo. He told him that he could take the Stargrapes and reminds him that honoring a family is the most important thing. This story touches Ichigo and Taichi promises that he will never break a promise from this point on, or tell another lie.

As the other girls watch from a distance, Yurika suddenly points out that they were told that he never told lies before. This causes the girls to realize that the polar bear and yeti stories had to have been true.

Eventually Taichi is forced to leave again. He tells Ichigo how happy he felt watching her perform and they see him off while she promises that until he returns, she will keep working to become a top idol that makes everyone happy.

My HOT teacher activities! Aikatsu! is ready to start! 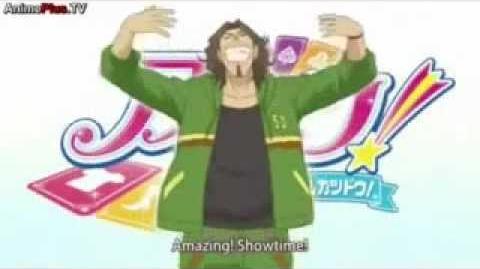