During their time off from Idoling, Ichigo, Aoi, and Ran decide to visit a Hot Springs. But after they step off of their bus to observe some flowers they are too late to catch the last bus and find themselves in a tight bind.

The trio change into their coords to partake in an audition. They dance to "Ponytail After School", wowing the audience as they each perform an appeal.

Upon finishing the girls express relief to have done this before Spring break- with Ran informing them that for an Idol it is called off time.

They return to the dorm and chat of their plans, including a trip to Fashion Central, a place they all wish to go have a shopping spree at, as well as go out to eat. Ran comments on how easy this all sounds, so they ask her what she believes "off time" is. Ran describes paying the hot springs a visit, and Ichigo remarks on how grown up this sounds- although Aoi doesn't get it until Ran points out that Mizuki has gone to visit one before. Upon realizing she could kill two birds with one stone, Aoi agrees to these plans as they chat about how good for their skin it would be; as well as the foods they sell.

The next morning the girls meet up, with Ran expressing surprise by the luggage Aoi brought. She assures her that she needed to be prepared for anything, but Ran insists she puts the items away as Ichigo runs up and apologizes for showing up late. Raichi kept her up, making sure she would remember to take pictures of Aoi, and she ended up missing the transfer train. They girls go to compliment each others attire before a couple recognizes Ran and the girl asks to shake her hand. Ran kindly responds as Ichigo curiously watches.

After boarding the train the girls remove their disguise items after realizing their identities aren't at much risk, and Ran scolds Ichigo for being so excited- since it looks unprofessional. Ichigo claims this moment to be special though, since it's the first time they're all going on a trip together. She starts to imitate Johnny-sensei when another fan happens to approach them, an older woman who recognized Ichigo but is unable to recall her name. She asks for an autograph after Ichigo introduces herself, and once she walks off the person with the snack cart approaches, asking if they want anything to eat or drink. The girls request bento- but Ichigo struggles after finding out they don't serve her favorite seaweed bento. After being unable to make up their mind, she and Aoi decide to split a healthy bento; although she suggests that Ran orders the hamburg steak bento. Ran accuses her of being the one who really wants it before voicing her desire to just order a few sandwiches.

After making their orders the girls dig into their foods, with Aoi practicing a food report with Ichigo. Ichigo discusses the selling points of her bento, then mentions the dexterity and texture before she takes a bite. She explains how wonderful the taste is and adds which side dishes she believes would be good. Aoi ends the practice, then Ichigo takes the piece of parsley that Ran was saving for last, offering pickled vegetables in exchange. Seeing that this solves nothing, Aoi suggests they order some tea- only to settle on a more mature drink: cafe au lait.

Eventually Ran points out that they are crossing over the sea and Ichigo feels saddned over not being able to hang out on the beach or go for a swim. However, she reconsiders after the girls bring up how unhealthy tans can be for an Idol. Throughout the remainder of their trip, the girls take naps and also play a round of cards.

Upon arrival, they find themselves in a strange new area and assume they might still be at the station. Aoi looks up something using her phone, remarking that it will take at least twenty minutes by bus to reach the hot springs. Suddenly they spot a vehicle, but they find it's very different from what they are used to while admiring the passing scenery.  As they are passing by a field of Rape Blossoms they ask the driver to stop the bus so that they can get a better look and step off of the bus, with Ichigo deciding that they should have a flower viewing tea party.

Aoi and Ran agree and they take out the tarts they brought with them: cream cheese, chocolate, and fruit. However, when Ichigo is unable to understand again they play rock-paper-scissors to decide; Aoi gets the first choice but is unable to decide, since each one is well-made and looks delicious; the cream cheese was carefully picked and sent from Burgoyne, the chocolate was imported from Paris, and the Fruit is hand-grown from an organic farm.

With this in mind, Ichigo decides to settle things by giving her the fruit tart- claiming it fits her image. She then swipes the chocolate one, which both Aoi and Ran express annoyance in since they wanted it. They call Ichigo greedy and start to chase her around before the trio come to the mutal agreement of dividing each tart. Ichigo is disappointed over her small chocolate piece but Aoi and Ran find it fair since they gave her the piece she already began to eat. To go with these tarts, Aoi reveals that she got some Earl Gray tea.

Once they finish, the girls lay down to relax. Although, Aoi and Ran begin to wonder if it's possible to gain weight from laying a certain way- until realizing Ichigo fell asleep already. They find themselves unable to resist and drift off to sleep soon after.

The girls awaken and realize how late it is; pointing out that if they don't hurry up they won't have very much time at the Springs. They head back to the bus stop but are unable to figure out when the next bus will be coming by, with Ran pointing out that they will need to return to the station anyway; or else risk being late too late to get home. Aoi is concerned over not having known this information beforehand but Ichigo blames herself, since she was the one who suggested they stop to view the flowers.

With no other option they decide to walk to the station, with Aoi bringing up that it will probably take an hour to get there. Ichigo offers to take her suitcase, but Aoi initially refuses- only for Ran to take it, saying that it's only fair for them to help since she packed so much for their sake. Aoi still feels remorse but Ran and Ichigo are able to cheer her up.

Suddenly, a vehicle happens to pass them and stops. A girl appears to ask the girls if they are really who they look like, and she tells the person inside that she was right after they confirm it. She mentions how lately she has based her looks off of them, since they make her so happy, and she asks why they are out there. After the girls explain what happened, she offers to give them a lift to the station. At first they refuse, but after she reminds them of how far it is, they quickly reconsider and hop in.

While on their way home, Aoi voices how tired she has become. Ichigo mentions that although they weren't able to reach the hot springs it was still a lot of fun and they look outside to observe the ocean, again admiring it's beauty. Now that the sun has began to set it looks even more beautiful, but Ichigo is caught off guard when she gets a text from her father, announcing his arrival at home. 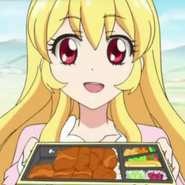 Retrieved from "https://aikatsu.fandom.com/wiki/Episode_24_-_Enjoy%E2%99%AA_Offtime?oldid=225047"
Community content is available under CC-BY-SA unless otherwise noted.