As Ran trains for the Spicy Ageha representative audition, she begins to lose hope after losing to third-year student Ema Shinjo in another event. Ran begins to push herself past her limits, causing everyone to worry.

Ran is in the middle of training for the seasonal audition to decide who will be the representative of her favored brand, Spicy Ageha. The other four watch as she practices her model walk and even Yurika seems impressed, though she covers it up by claiming how rare it is for her to compliment someone. This causes the others to comment on how cute her normal self is, which she finds flattering until hurriedly threatening to suck their blood. Ran comes by and gives her thanks to the girls for waiting for her, and Ichigo brings up how much fun they are having and learning by watching her. They are all rooting for her to win.

The next day, Johnny begins discussing spring and the approaching Graduation Ceremony. The third-year students will be graduating this month, and he goes over the message he got from Mizuki. She starts by greeting everyone and makes an important announcement; for this years graduation ceremony there will be a fashion show that the high school students and alumnae of the academy will be attending. She wishes everyone to do their best and asks that anyone who will be trying out to contact her.

During lunch, the girls recall how right after class, Ichigo tracked down Mizuki in order to apply for Ran. While Ran is angry that she did this with no consent, the others are sure she would be perfect.

All of the underclassmen quickly get to work preparing the send-off event for the graduating seniors. Ichigo suggests they try something flashy when Aoi agrees to it, only to inform her right after that she has a lot of paint on the side of her face.

After school, Ichigo and Aoi walk around the campus while complaining about the cold. They see Ran run towards them and she mentions that she has been running twice as much today. She wants to give the Audition her all and goes on to mention that there is someone she has to beat, and while they return to the dormitory, she brings up a third-year student who goes by the name of Ema. A model with expertise when it comes to styling with Aikatsu cards- no matter what she wears she always looks great, which is why it is important for her to someday overtake her. She recalls the first time she met Ema, bringing how amazing it was to see how many Aikatsu cards she had. Ema was able to deduce that Ran loved Spicy Ageha and they discussed how much they liked fashion. While Ran only likes Spicy Ageha, Ema likes all sorts of different clothing and she manages to make all of the combinations work- but as Spicy Ageha is everything to Ran, Aoi, and Ichigo decide they should help her out.

While Ran exercises, she admits that she began to like the brand when she was in her third year of elementary school. Her hair was cut really short and because of that she was often mistaken for a boy and used to model boys clothing. After Aoi deduces this to be a rare occurrence now she begins to despair for not knowing this, then asks Ran if she has any pictures on hand. Ichigo asks Ran why she decided to change her image, and Ran brings up how wearing something from Spicy Ageha made her feel like an entirely different person. She decided to change into someone befitting of the brand because of her love for it- and while she doesn't know if it was what shaped her into who she is now, she really loves it and doesn't plan on losing.

Eventually, the day of the audition comes along and the anxious duo awaits the results. As Ichigo stresses out, they are joined by Ran who informs them that she had lost. She claims to be fine and mentions how excited the top designer had been over Ema- which is really rare due to her stoic attitude.

As Ran leaves the performance area, she is stopped by Orihime who reveals that her performance was perfect; but she lacks what it takes to become a Muse for a designer. She asks Ran to think this over, and Aoi explains what a Muse is to Ichigo: Designers do not want perfection, just a person who can inspire them. However, Ran takes this as a sign that she isn't good enough yet and makes plans to work harder.

Later that day the girls go for a run and Ran attempts to ditch the girls since they are only slowing her down. They try to keep up, pointing out that she's already way ahead of them.

While this is going on, Mizuki, Ema, and two unknown upperclassmen are watching them and comment on how well she is doing, before suggesting they don't let their guards down.

After their run, Ran leaves for another lap, only for Ichigo to remind her that they need to resume work on their seniors' graduation ceremony and it's a fashion show. Ran refuses, saying that she isn't ready for it yet and takes off, leaving them to wonder if she felt worse than what she led on.

Soon the day of the Graduation Ceremony arrives. Everyone else had gone to finish preparing for it but they don't know if Ran is showing up or not. At the moment the girls are preparing bouquets while discussing her, but Aoi points out that they need to focus more on the ceremony to make sure it's good enough for the Graduating students. She is sure that Ran will come.

Ran decides to take a break from her training upon realizing she's been tiring herself out when Orihime approaches, commenting that she doesn't seem to be enjoying herself. Ran remains quiet as she brings her up to the third floor, into a room full of portraits of the Graduating students posing together. Ran is unable to understand until Orihime mentions that they're all enjoying themselves, and in the pictures it is obvious. Ema had done all of the stylings for the pictures, so she has a lot of fun preparing and participating. She openly questions if being around her makes others want to be more stylish as well since the class has a lot of fashion-based students before recalling how Ema inspired many designers. Ema is amazing because she understands what it's like to be a muse.

Orihime reminds Ran of what a muse is, then goes on to say that a muse is beautiful and wise; and each trait she has can inspire large numbers of artists and their existence is why they can keep going. Ran is also like this, and she points out that her friends saw her effort and they decided to put in the same amount for the Ceremony. Designers are like that as well, and those who can awaken the spark of creativity inside of them are called muses. Ran thinks back to how happy the top designer for Spicy Ageha was as she watched Ema perform, then realizes the error of her way. With that in mind, Orihime hands her set of new coord cards and explains how they had been left by the designer and to be given to Ran when she smiled again.

As Mizuki makes a speech the girls await Ran's arrival. They know she will come, and she apologizes upon suddenly showing up. Yurika expresses happiness- but quickly insists that Ran was being rude for making her wait as Aoi suggests that Ran get ready, but she tells them she wants them to come with her. The girls don't understand until she explains the cards and hands a set to each friend. Excitedly the girls run into the changing area and appear on stage to perform "Growing for a Dream".

Congratulations are passed around by the time they finish and Ran runs off to find Ema. She gives her a bouquet and promises to her that someday she will make it to the same stage as her, and even go on to surpass her. This pleases Ema while Johnny and Orihime watch from nearby. Johnny congratulates himself for a job well done, until Orihime reminds him that he didn't even do anything. 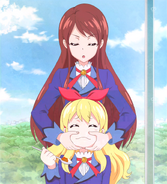 Retrieved from "https://aikatsu.fandom.com/wiki/Episode_23_-_An_Ageha_Muse?oldid=257692"
Community content is available under CC-BY-SA unless otherwise noted.