The girls anticipate their audition for a popular crime drama, Naughty Detectives. In the midst of their excitement, they also find themselves against fellow schoolmate and gifted young actress, Shion Kamiya.

Ichigo and Aoi pretend to act out a role from the mystery-drama "Naughty Detectives". Unknown to them, Mizuki was watching and she comments on how well she thought it was while walking by, which flusters Aoi. But unknown to them, another girl observes them from the distance.

During class, a special message informs the class of a brand new audition for the very same drama series. Everyone is excited due to its popularity, and this continues on through lunch, as all the girls show interest in trying out for it.

Aoi goes ahead to look up a little information using her Aikatsu Phone, observing information related to the characters in Naughty Detectives. This causes her to describe the many various types of idols that exist in the world, such as those who focus on acting, and those who focus on singing. With both of them being such big fans, Aoi and Ichigo really want to pass this audition and resume acting out roles within the show, with Aoi insisting that Ichigo needs to be more serious. Though Ran insists that they focus on eating lunch first before it gets cold.

As they do this, the strange girl from earlier walks by and Otome identifies her as Shion Kamiya, an actress who began at the age of ten. She had been recognized as a genius child actor with genuine star appeal who normally comes off as cool and quiet; but is capable of switching persona instantly. Ran recalls running into Shion a few times prior to this moment and comments on her difficulty, and while Aoi is capable of recognizing this; Ichigo doesn't really care since she's more focused on having fun.

Back in the dorm, Ichigo and Aoi watch an episode of Naughty Detectives, taking in several details and aspects that they can think of while doing so. While Ichigo is still excited, Aoi is still bothered by what Shion had said earlier and they begin to discuss her instead.

Meanwhile, Shion is busy training. But she stops to scold herself and consult a "dummies" series book for some more information.

The following day, Johnny is acting like a detective but Aoi doesn't believe that such a role fits their teacher much. He returns to normal, to which she confirms suits him more, and he goes on to announce that for this audition, there will be some options. Instead of just one role there will be two to try out for; one for an intellectual character, while the second is described as the boyish-type. He then goes on to say that he believes the most important thing to remember and focus on is the ability to ad-lib, which confuses just about everyone.

Later, Ichigo attempts to determine which role is more suited for her while Aoi and Ran make plans to try out for the intellectual role. Ichigo makes an attempt to act like this role- but Ran and Aoi are unable to see her fitting it. So she decides to take on the boyish role.

With that settled, Aoi is now cocnerned over ad-libbing since she never had to do it before. Ran isn't very confident either, surprising Aoi considering how she and Shion make themselves look so perfect. Ran claims to hide her weak points, and she is sure Shion probably does the same thing.

At lunch, everyone reacts with shock and horror when they see that Shion has suddenly appeared with her long, beautiful hair cut off and restyled. As she walks by they wonder if she might have messed up and had no choice but to cut it so short, but Aoi and Ran determine that it was probably a form of method acting. This startles Ichigo as she holds onto her own hair, and they go on to explain how some actors go to such lengths in order to perform their roles by embracing the character and changing things about themselves. While watching Ichigo act accordingly, Aoi grows even more worried.

In their dorm room the anxious Aoi watches more Naughty Detectives. She is beginning to feel as though her acting is a poor, cheap imitation of the role she wants to try out for, and seeing how stressed out she is, Ichigo suggests that she goes outside for a nighly run and asks her to join her. She agrees and they come to a stop near the Gazebo. Aoi asks Ichigo why they are here, and Ichigo expresses her desire of hoping to help Aoi forget her uneasiness. Aoi is surprised, but upon realizing it worked she thanks her dear friend.

To their surprise, Orihime approaches to inform them of how late it is. Ichigo apologizes and they explain their concerns, with Aoi bringing up what Shion said earlier. Orihime is able to guess that it was Shion before she even says her name, and points out that she may have said this in order to remind herself of her words, rather then come off as offensive. She decides not to say anymore at this point, suggesting they return to their dorm for bed.

While the girls discuss Shion some more, she is shown to still be awake, busily practicing for the Audition. She starts to think about how she used to be, a girl with no self-confidence until her niche in acting came to be. She was very happy, and she hopes to hang onto this feeling forever.

The following morning, Ichigo wakes up to find Aoi researching something very difficult. They are distracted until Ichigo realizes it is now after eight, and they rush to finish preparing and head to school.

Since then, Aoi has been focusing spare time into putting effort and work into that role until the day of auditions arrive. After everyone sees there aren't any scripts, they realize this was what Johnny meant by ad-lib. Ichigo sees Shion and approaches her to wish her luck, but Shion ignores her kindness by saying she is a distraction. To get Ichigo to focus on the coords they should use, Aoi quickly pulls Ichigo aside.

When the auditions begin, the girls all hesitantly watch from a distance. Ichigo is very excited to work alongside the actors in Naughty Detective and soon her try approaches; where she starts off well but ends up tripping on the carpet and falling to the floor while serving tea. Despite catching the tea, Ichigo is humiliated and runs back to hide by her friends with heavy remorse in wasting her turn.

Soon Aoi's turn arrives and at first she does really good, until she is surprised by a question. She is able to answer it truthfully and this catches everyone's attention. Shion then takes her turn and she puts in a good Audition.

Eventually, it's revealed that the two who won the role were Aoi and Shion. Everyone changes back into their original clothing, and Aoi thanks her friends for their support and kindness. Shion also approaches, and comments that she actually had fun today before she compliments Aoi.

Sometime later the drama had been recorded and the girls are shown with acting in their roles. Otome and Ichigo are very excited, when Aoi brings up that Ichigo's part is coming up soon, reminding her that she did receive a small part; the one involving her falling to the floor while serving tea. 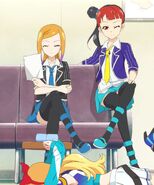 Retrieved from "https://aikatsu.fandom.com/wiki/Episode_14_-_Naughty_Detectives%E2%99%A5?oldid=224085"
Community content is available under CC-BY-SA unless otherwise noted.