Episode 13 - The Tragedy of Calories!

As the New Year rolls in, Orihime informs Mizuki of her planned partnership with Ichigo for a special stage event. Meanwhile, Ichigo ends up eating too much over break and the others try to get her to realize the importance of staying in shape.

Ichigo puts the finishing touches on a new years inspired bento and exchanges parting words to the customer. Ringo apologizes for making her work recently, since she was hoping to let her relax during her break from the Academy. Ichigo claims it is fine though, happy she can still make food like she used to since it's been a while. They are joined by Aoi and a few of their friends from their old school, and they ask for an autograph when Aoi happens to spot Raichi taking pictures of her holiday attire. They also happen to notice that Ichigo seems a little bit pudgy since last seeing her.

Meanwhile Mizuki is busy having a chat with Orihime about Ichigo. Orihime is in the middle of painting something and while Mizuku is a little concerned, she decides to trust Orihime's intuition.

Back at Nandemo Bento, the Hoshimiya family watch as Mizuki is on television. Their meal has just finished being made and Raichi watches as Ichigo eats more than usual. He wonders if she always ate like this after Ichigo mentions going on her fifth bowl of rice, but she can't remember- although it's fine, claiming that she is only eating a lot because their mother makes such great food. A bit later, Ringo is preparing the New Years soup and asks them how many pieces of mochi they want. While Raichi requests one, Ichigo asks for three.

Over the course of time, Raichi keeps noticing other suspicious eating habits, such as how Ichigo ate some cake, and an entire box of chocolate. He reminds her that school will resume soon and Ichigo promises that she will eat better the next day.

By then Aoi is surprised to see that Ichigo had put on a lot of weight since seeing her.

At school, Ran and Otome chat with each other until they are joined by Ichigo and Aoi. Ran is shocked to see Ichigo like this, but Otome happens to like it since she thinks it makes Ichigo look cute. She tries to offer Ichigo some Pop'n Popcorn, but Ran scolds Ichigo for being careless with her eating habits. She goes on to question if Ichigo can really keep being an idol and they head to class, where even Johnny-sensei expresses shock. Ichigo is sure he's just exaggerating though, since she is sure that her weight will go back to normal with some exercise.

As a new years present, Johnny announces a great audition he scored for his class. It will be for the New Year Shining Girl, causing everyone to become excited, although Ichigo isn't. Johnny asks for anyone who wishes to partake in it to raise their hands, and Aoi uses this to motivate Ichigo by volunteering her for it.

When break approaches the four go on a run, finding Ichigo way behind them. They try to keep her going, and point out that she's only run a single lap. Her lazy behavior continues throughout the day as they continue to try to encourage her- although she tries to reason with them to take things easier on her. While she works on her book balancing practice, Otome comes by to try to offer her more Popcorn.

As they eat lunch the girls quickly notice how much food she got. They warn her that she needs to focus on losing her extra-weight and prepare for the audition, which they cannot do if she keeps getting tired like this. To keep her from eating this food, they bring her to the coord changing booth and tell her to change clothes. Ichigo initially doesn't understand until seeing the device refuse to open up and let her inside. Ichigo fears she can't fit through it anymore because of this, but Aoi claims it is because she forgot something important for Idols; gaining weight is not bad, but you have to remember to always be yourself.

With that thought Ran and Aoi begin to wonder if they tried too hard to make Ichigo realize she had a problem, and they leave, with Ichigo realizing that even Mizuki is disappointed in her. She realizes that she must focus on self-improvement, and she can't keep being lazy like this. She decides to go for a run, recalling that she has to prepare for this audition and how much effort they put into trying to help her.

As they head to the track they spot Otome running around and Ichigo quickly joins- only to regret it later due to running too much. Ran informs her of this mistake, but Ichigo claims that she had to since she only has a week left before the audition. The girls promise to join her in her exercise, pointing out that they also put on a few pounds in this time and decide to go on a diet to help her. They do about twenty minutes of exercise to burn some fat while dancing, then they work on ridding of access fat on the stomach, and model walk to help shape their legs. Ichigo also goes on a run, while Otome stops for a snack.

Come time for audition, Ichigo reveals that she was able to slim down, but she has still been exercising and dieting; however this causes her to run out of energy until she eventually collapses. Suddenly, she smells something yummy up ahead and follows the trail to find Naoto burning a pile of leaves, which he used to steam some potato. He offers her one, but she expresses guilt over this until he manages to convince her to take it.

Ichigo runs into Mizuki and they sit down to chat. She gives her the potato and explains what happened, before wishing she could be more stoic like Mizuki is. Mizuki claims that it is okay to let go every once in a while, and mentions how she enjoys having an ice cream after training. Rather then eat the entire potato, she offers some of it to Ichigo while explaining the importance of having energy obtained from food.

Now that it's time for the audition, Ichigo changes into her coord she chose and performs "Trap of Love".

After her performance, Orihime mentions that because the four have been passing so many auditions lately, she will grant them permission to start applying for Drama roles. Ichigo expresses surprise and she realizes that nobody bothered to inform the girls of their various audition types up until this point. While they are excited, Johnny scolds himself for being forgetful.

Elsewhere, Mizuki is wondering if Ichigo can really keep up with her. 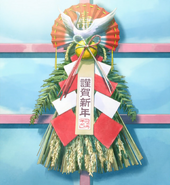 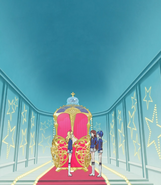 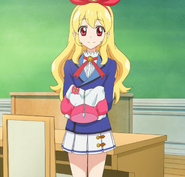