Soleil reveals their plans of a six-month Tour around Japan. While Akari, Sumire, and Hinaki help them in preparation for it, they begin to learn the importance of following their dreams.

Sakura is in the middle of an interview after her win for the Queen Cup. They discuss her popularity and how more recognizeable she's become. Sakura thinks about her past as an idol and what led her to this major win, and she disusses her plans of living up to the reputation of past Queens before her.

In the Cafeteria, the girls are discussing Sakura while they flip through a magazine. Akari is dedicated to stepping up her game, though she didn't expect to win this time around because she realized she needed a lot more effort. Suddenly Akari gets a KiraKiratter post describing the surprise press conference Soleil will be holding, curious they turn on the conference and watch as the trio thank the audience for showing up today. They go on to announce their plans to hold a special Spring Tour Nationwide known as Soleil Tour, Out Dream. They will be performing at five various stadiums and the tour will last for six months. As the audience cheers, the girls wish for everyone to attend when they get a chance before the conference ends.

Later, the girls are walking when they spot some strange staff members at the front. Juri joins them to reveal that Soleil's project room is just right nearby and explains it is a space devoted to planning for the Tour. The girls are surprised that it's in the school and they decide to try to find out more and join them with snacks in hopes they can stay. They find a lot of work going on when Ran and Aoi approach them, and they sit down for some tea Sumire prepared, along with the star donuts they picked up. The girls feel a little bad stopping by without warning but nobody seems to mind.

They are joined by Ichigo, who devours a donut in a single bite as they discuss the project room. Since the girls are all so busy, it only made sense that they find a single place for everyone to meet at. They have been planning this tour for a long while and admit that on certain days they couldn't even get their schedules lined up. With Ichigo's radio program and variety programs, and concerts to top it off. Aoi also spends all of her time on set whenever she isn't asleep, and Ran has been busy with her fashion shows for Spicy Ageha. However they wanted to come together to hold a proper national tour, no matter what it takes or how long. They reserved half of a year just for it and they discuss the name a little more after Akari guesses what part of it was inspired by. This dream gave them the motivation to keep going, but before they can say anymore the girls are called off to discuss their wardrobe. Akari stops them first though, to tell them that they will try to lend a hand if possible.

That night the girls hang out in the dorms and discuss Soleil. They also discuss Sakura's dream that she managed to achieve, causing Akari to say that they need to chase after their own dream; such as her dream of one day catching up to Ichigo when she thinks back to the promise she made her sometime back. She will see to it that it comes true one day, but she is a bit concerned since it can be really hard sometimes. Sumire agrees, since there can only be one starlight queen and top idol- the roles can't be shared. Akari even admits that Ichigo was unable to become Starlight Queen, despite how talented and popular she is, and these words lead the girls to the sombering realization that not all dreams come true.

For a while after this, many meets and promotional events for ticket selling was being held. The girls helped out as much as they could, from selling tickets at their own promotions and giving the girls a drink after training. Ichigo is very dedicated to keep going and suggests while they take a break that they do some crunches. The girls are surprised to find Ichigo willing to keep working, but she soon finds herself distracted and asks why they were doing crunches; until they remind her, causing her to reveal that they will spontaneously keep training no matter what because of their first and most important number one dream. Ran tell the girls of their desire to keep Soleil going because their trio unit is very precious to them. Ichigo suggests they should keep going even at old age, but Ran skepticly points out that they might lose the ability to dance by then. But Ichigo claims that even if this dream is impossible, as soon as you latch onto the idea you just want to keep pushing.

Later the girls head back to the dorm and discuss what they learned earlier. Sumire mentions that even though Aoi said they don't know if they can achieve their big dream, they just want to keep going. With these words the girls are very motivated and Akari recalls to when Ichigo handed over her microphone she used during the Starmiya Festival, telling her to inherit her dream of an idol. While she is unsure if she can do it or not, she plans to stick with her dream.

Soon the day to kick off the tour begins. The announcer reveals Soleil's plan to put on a performance before they go and everyone begins to cheer. The trio share words of confidence and support with each other and they go to change into their desired coords before appearing on stage. After they appear, they perform "Good morning my dream".

In their dorm rooms the girls begin packing up their items for the time while they will be away. Akari, Sumire, and Hinaki arrive to see them off out in the hallway. Akari wishes them all well and they meet up with Sakura, Orhime, and Johnny-sensei who have also showed up to say goodbye to them. Akari tells Ichigo that she will become the Queen and they all say goodbye to them as they step aboard the bus and they all wave to each other while the bus begins to drive away. 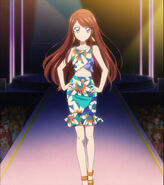 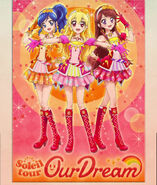 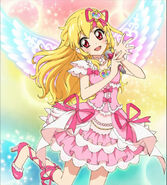 Add a photo to this gallery
Retrieved from "https://aikatsu.fandom.com/wiki/Episode_125_-_The_Other_Side_of_Admiration?oldid=258464"
Community content is available under CC-BY-SA unless otherwise noted.