It's the day of the Starlight Academy Christmas Party and Akari and friends are working hard to make the party a success. Meanwhile, it seems hot idol Juri Kurebayashi wants a tree just like the one Ichigo and friends cut down three years ago.

Johnny has just finished training with Akari, Sumire, and Hinaki, when Orihime comes into the room with Hinaki's brand new premium rare cards. She reads the note Kayoko sent along with it before voicing her own excitement of this performance.

Later, the girls are finishing the set-up for a tree when Akari thinks about the time Ichigo went and chopped down a huge tree and brought it back to the Academy. Yu's roommate asks what made her do this and they recall Ichigo's desire to help a friend who felt sad. Akari recalls that this was also the first time she saw Ichigo perform, and since then she dreamed of becoming an idol. At times she still hardly believes she's made it.

Sakura joins the girls and calls for everyone to join her in the cafeteria, where she explains that work has been going smoothly and they are down to finishing decorations, cooking the food for the event, and stage preparation. She asks for anyone who is done or has free time to lend a hand to anyone still working, and when the girls spot the Director dressed as a snowman, she explains that this is an "off-pic". Akari resumes work with Hinaki finishing decor while Sumire and a couple other girls work on cakes and some other items with Yotsuba.

As Hinaki is helping the Director get a close-up view of Sumire, Sakura rejoins them to inform everyone that the students from the highschool devision will be returning to the school that night. The girls are excited, with Akari hoping that Ichigo and the others will be able to join them for the Christmas Party. They continue working until eventually they finish, when Yotsuba points out the cake still needs to be decorated- only for Otome to surprise everyone when she shows up and asks to lend a hand, admitting the scent lured her in.

Juri walks into the room and starts to admire the nearby Christmas Tree. She apologizes to Akari for not being able to help, since she has to film the special promotion for Aikatsu Sensei now, but Akari claims it to be alright. As this goes on, Hinaki narrates an introduction for Akari and Juri while the Director films them. Akari asks Juri if she will be returning, and Juri discusses her intention of showing up in time since she's been waiting for the party. Akari is surprised and Juri explains that during her hiatus she had to spend the Christmas with her grandparents since her mom and dad had to work. They got her presents and prepared a special dinner, and even made a little bonsai Christmas Tree, and she even recieved her New Years present a bit early. Then, three years ago she witnessed Ichigo, Aoi, Ran, and Otome pull the tree back on Television. It deeply touched her, and Akari admits that she felt the exact same way.

As Juri begins to discuss the tree she assumed they would be cutting down another classmate comes by to tell her that her ride showed up. Juri is disappointed she can't be there to help but she wishes Akari luck before taking off. Noticing her discontent the girls express concern and Akari remarks that she would like to go out and cut down a tree too, so after informing the others of her plans she takes off, with the concerned Sumire and Hinaki, and the curious Director following.

Akari walks around in search of an Axe when she happens to spot Naoto. She makes an attempt to casually ask but he easily deduces why she needs it and hands it over, but he warns her to be careful. She promises she will be and having changed into warmer clothes the girls leave the school. Hinaki begins to ask where they can find the tree but noticing Akari seems assured of herself, they are joined by the Director, who invites on lending them a ride to the location with his van.

Sometime later, Akari and the others burst into Tsubasa's office. He gently scolds Akari and she asks that he take her to the tree near his home as its the biggest fir right now. Tsubasa voices that while he would not mind, Dreamy Crown doesn't own the land so he can't really help. She apologizes for asking such a big favor, but Tsubasa has another idea, and he calls Asuka to ask if the girls can have one of her trees for the party. She sees no harm in it and agrees, but she asks that they wait twenty minutes so that the filming going on right now can finish.

With that the girls leave for Angely Mountain, as the van stops at a trail Sumire reads a fortune in hopes of inspiring everyone. The Director explains that the van simply can't go any further, so the four step off of it with their equipment and they begin to make their way up; a worn out Sumire, Hinaki, and Director trailing behind the energetic Akari.

Just then, Akari falls over. She assures the others she's fine though, and she forces herself to stand up and continue until they find the tree in question. The girls express concern for her but Akari insists she can, swinging the axe into the tree. She alternates with Sumire and Hinaki every few swings, and as this is going on Asuka is shown observing them from her home.

Eventually the girls begin to saw the other side of the tree and send it crashing to the snowy ground, but now they realize they need to get it down the hill- only to see the tree beginning to slide on its own. Akari chases after it and jumps onto the tree, followed by the others and they manage to steer it down the hill; only to make a crash landing and find snow is covering the van. The Director is concerned once more and remarks that the tree is too big to fit in or on the van, but just then the girls are shocked to find Juri's mom, who reveals she came to Angely Mountain to lend them a hand.

Back at Starlight Academy the party has started, but when Ichigo, Aoi, and Ran arrive to find a worried Sakura, they approach her to discover the girls aren't back yet. But they hear a helicopter flying above the school and rush outside to find the girls, along with Orihime, and Johnny-sensei watching as the tree is being brought in.

Ichigo compliments the tree while the other classmates show up to lend a hand decorating it so that Akari, Sumire, and Hinaki can prepare for their performance. They go to change and arrive on stage to perform "Hello Winter Love".

With the tree decorated and the performance done, everyone heads back outside to admire it. Juri is delighted as she shows up, revealing her mother informed her of what happened. As others tune in to watch the program, the girls wish everyone a Merry Christmas. 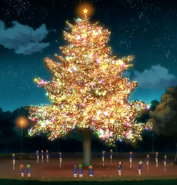