The girls meet a popular student known as Otome Arisugawa, who will be Ichigo's rival for an upcoming Christmas Event audition. After realizing how serious Otome is about her training, Ichigo learns to take her own studies more seriously.

While heading to class, Ichigo, Aoi, and Ran happen to find a girl falling into one of the school fountains and rush to her aid. As they notice her absentminded behavior, Ran offers a hand to help her, asking if she will be okay since she's covered in water now. Ichigo offers her a towel before Aoi recognizes the girl as Otome Arisugawa, someone who competed in the 17th National Pop Girl Grand Prix, appeared in commercials for Pop'n Popcorn, Cheerful Pop Candy, and Get'cha Cold: Freezing Ice Pop. The girls chatter about how cute Otome is until hearing the late bell suddenly ring. She apologizes for keeping them and they run off to help her change before getting to class.

During class the girls think about Otome and how she wound up in the fountain. Ichigo is unable to get over how cute Otome is, while Ran is just happy that she didn't get hurt or sick. Aoi is just relieved they weren't in trouble for being late, since Johnny wasn't in the room yet. As he arrives, he announces the special Christmas Event coming up, and how Starlight Academy will be holding a special Tournament to decide which three girls will take part in it.

While everyone wants to compete, Ichigo is shocked to find Otome will be her first opponent. Aoi warns her not to take things lightly since she will be hard to beat, but Ichigo is just happy since she likes Otome.

Meanwhile, Orihime and Johnny are pretty excited to see what will happen during this. With Otome and Ichigo being somewhat alike, the round is unpredictable.

That evening Ichigo studies the commercials Otome worked for and makes comments on them. Aoi is concerned that Ichigo may not be taking this as seriously as she should be, pointing out that if she doesn't focus on it she could lose. Ichigo claims to be working though, stating that by watching the commercials she can learn more about Otome.

Meanwhile, Ran is busy doing her nightly stretches when someone knocks on the door. She is surprised to find Otome outside, offering her some Pop'n Popcorn for helping her earlier. Ran mentions that she usually doesn't consume sweet foods at night, but Otome takes this wrongly by assuming she would prefer something salty and runs off.

The following day, Ran brings the salted Pop'n Popcorn for everyone to eat and explains that Otome gave it to her the previous night. No matter how many times she refused it, Otome didn't give up until she took it. This causes Ran and Aoi to compare her to Ichigo.

Later, Ichigo has finished the entire bowl of popcorn and Aoi warns her not to let her guard down. She shows her how Otome acts in an interview, with Ran claiming that she might be purposely laying her cute personality on a bit thickly; despite how much of an airhead she is, she also puts a lot of effort into everything she does. Ichigo still seems doubtful and soon takes off for a run, causing Aoi to resume worrying.

As she is out, Ichigo happens to find Otome in the middle of a breathing exercise. She is amazed to see how elegant she looks- only for Otome to suddenly fall over when she sees Ichigo watching her. Seeing her confuson, Otome explains how image training works and claims that her inspiration came from pretending to be a swan. She always felt she had to work twice as hard as others though, because of how clumsy she is.

The following day in class, Ichigo reveals what she learned to her friends, and in this time she finally realized that she has to be more serious. However, now she's worried that she doesn't stand a chance at all.

Regardless she plans to try as hard as she can, and once class ends she gets straight to training until she is too sore to move and winds up in the dorms. Aoi soon joins her, suggesting that Ichigo take a bath in order to relax her muscles. Ichigo agrees, although it take her a while to get there.

Later, Ichigo decides to get another run in when she comes by Naoto, who gives her some advice.

The next day she is shown taking it, listening to the song she will be performing. She takes the lyrics and harmony in until getting distracted when she spots Otome again, who is by the fountains once more. She explains how often she likes to come by to see he rainbow that shows up, but when she doesn't see it she wonders if winter clouds may be preventing it, and she gets up to leave. She spots it in this moment and happily admires it's radiance.

On the day of the audition, the trio notice Mizuki has come to watch. She wishes them luck and to Ichigo's surprise she finds Otome suddenly a bundle of nerves and calms her down. They go to change and appear on stage to perform "Angel Snow".

After their performance, Otome congratulates Ichigo on her win. But she is surprised to find her crying all of the sudden and wonders why this is. Ichigo reveals that she has become a fan of Otome, and it turns out that both Aoi and Ran won their respective Auditions as well. Orihime and Johnny go on to announce that because of how many entrants they have decided to make a fourth position for the Performance. The entrants who lost will be competing in a "Revenge Match". 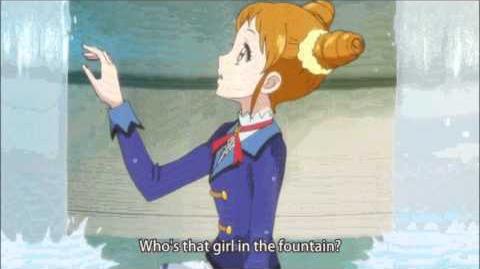 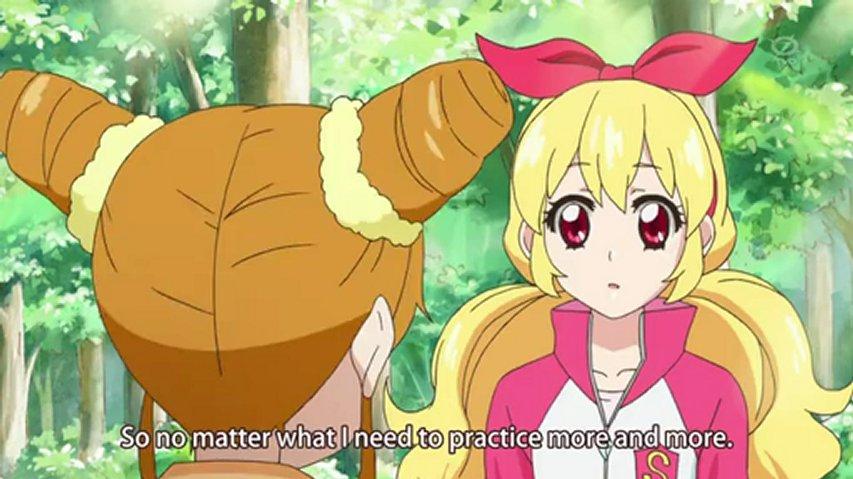 Aikatsu! Episode 10 sub
Add a photo to this gallery

Retrieved from "https://aikatsu.fandom.com/wiki/Episode_10_-_The_Rainbow-Colored_Otome?oldid=255384"
Community content is available under CC-BY-SA unless otherwise noted.