Ichigo becomes curious of an anti-social, yet popular classmate of hers and seeks to befriend her. So when the two get paired up for an audition, Ichigo must learn how to understand the seemingly untouchable girl.

Ichigo and Aoi are both running to their class when Ichigo realizes that she forgot her student ID. She runs back to the dormitory with Aoi following her. Moments later, they arrive at the academy, where Ichigo thanks her before going inside. They spot a girl with brown hair viewing a bulletin board and after Ichigo recognizes her as a classmate, Aoi identifies her as Ran; a thirteen year old idol veteran who has performed since she was young. Polished for her beauty and talented for her age, she is known by her earned alias, the "Beautiful Blade," for her sexy look.

As Aoi admires her, Ichigo realizes that they hadn't spoke to her yet and walks up to her to introduce herself, along with Aoi. Aoi politely asks Ran to help them out with their studies in hopes of striking up conversation, but unfortunately, Ran makes an off-topic response by telling them "not to disappear together," before she walks away. Collecting their opinions about Ran, Aoi thinks she's sexy and cool and Ichigo compares her to Mizuki. Then she thinks back to when Mizuki told her that she and Aoi won't rise together.

As time passes, Ichigo and Aoi steadily kept an eye on Ran and start to believe that she is always acting by herself. Aoi thinks it's part of her image and probably prefers to be alone but before they can say much more of it, Johnny Bepp enters the classroom. He announces to the students that he managed to get them a chance to be in a Fashion show audition and explains that whoever wins will be featured as the model for a popular fashion magazine called Smile Pop Lemon. But only two students will get into the audition, and everyone is partnered by a game of chance.

Everyone grows uneasy, while Ichigo hopes that she and Aoi will be together. In the end she is partnered with Ran and grows disappointed, due to the experience she has. Aoi tries to cheer her up by saying that she should have good fortune from this and if she passes she will get to be in the magazine, but Ichigo accuses Aoi is being relieved because she wasn't given to Ran. Aoi tries to claim otherwise, but it doesn't fool her flustered friend.

Back at the dorm Ichigo struggles to keep confident, knowing that if she fails Ran would be furious. Aoi continues to try and cheer her up by making her see her real self instead of a girl who gives up, and tells Ichigo to just put in her fair share of work. With that in mind Ichigo leaves to do some rehearsal, spending the entire day focusing on posing, posture, and balance until Aoi comes by to applaud her effort.

Ichigo still lacks confidence but Aoi reminds her that she can just continue practicing the next day. The girls share a smile, not aware of Ran observing them from a distance. She takes off to return to her own dorm, revealing that only she lives there while staring at the empty bed across from her own. She thinks back to the past, when that wasn't the case. She had a very confident roommate and friend, who felt that because they were always together, she got the courage and support to keep on going. It's then Ran remarks, "giving it your all doesn't guarantee success."

The next morning marks the day of the audition. Ichigo shows Aoi how much she has improved with her training and receives a compliment from Aoi regarding her style. She thanks her before deciding to resume practice by walking around the dorms until rehearsal.

While doing so, she spots Mizuki and approaches her with a greeting. Mizuki tells her to enjoy the audition before advising her by saying that the audience will find her unappealing if she gets too nervous. Ichigo thanks her and walks away after Mizuki tells her to watch Ran more closely, pointing out that she steps with her left foot first.

Soon the audition arrives. While Ichigo and Ran are waiting, Ichigo continues to practice while Ran sits on her own. She tries to motivate Ran by telling her to give it her all, promising to do the same, but Ran questions her well-meaning comments, saying that by only focusing on themselves it would make them unworthy of the glory an idol gains.

Speechless, Ichigo runs out of the waiting room and decides to continue practice on her own outside. Ran rejoins her to try to clear up what she was saying, asking Ichigo to come with her. She takes her to an observation room that overviews the Aikatsu System and explains that there is a lot more than just looking pretty on the runway. A model's job is to shine brightly on the stage that everyone on staff has put all of their heart into. As for the idols the people have come to see, they must express their feelings to the crowd, and not to stray off it. This makes Ichigo realize that she was too fixated on herself with anxieties of losing and recalls earlier on when Johnny mentioned that partners should focus on becoming one during the audition. As a model Ichigo cannot simply think about herself.

They head to the Fitting Rooms and place their cards on the crest of the booth to select their outfits. Ichigo donning the Pink Stage set while Ran dons the Purple Stage set. Then they both headed to the stage, where they perform prism spiral.

That evening, Aoi expresses delight over how well Ichigo did, and Ichigo is glad that she could see everyone watching her during the performance. Aoi also brings up how impressed she was by how Ichigo looked, causing Ichigo to laugh.

The next day, at the headmistress' office, Orihime tells Ichigo and Ran that they have passed the audition. Ichigo is delighted while Ran is simply thankful. Reviewing their performance, Orihime tells them that their technique was fascinating and asks if they practiced together, which Ran denies and deem Ichigo as nothing more than an airheaded prodigy, but she has great potential as far as she knows. This surprises Orihime to hear Ran praise someone else, and noticing Ran is smiling, she remarks that she must have "gotten over it", leaving Ichigo very confused.

Leaving the room, Ichigo asks Ran about this and Ran decides to tell her. Her old roommate was a lot like Ichigo, someone who had been her close friend but left a while back. Her friend became heavily dissatisfied with herself for not trying to keep up with her, and she eventually gave up on her Idol dream. She promised to continue to support Ran, and in tears the girl, Mako, left. Since then Ran has been haunted by the departure of her friend, knowing that she was unable to help her. She goes on to explain how her habit of stepping with her left foot first was because of Maho- as it was something she used to do. She believes that because Ichigo uses her right foot first, their opposite natures was what made their feelings sync.

For a moment, as this discussion is going on, Mako is shown observing a picture of Ran. She comments that they should both follow their own dreams.

Ran bids Ichigo a farewell as Ichigo thanks her for her help. She made her focus on others and realize what was important, but Ran claims she was only stating the obvious, and it was Ichigo who managed to "take flight from the runway".

In class, Ichigo apologizes for being late to Aoi. She keeps going because of her out of fear she will slow her own- but Aoi insists that they don't need to be together all of the time, as long as they can be in spirit. Ichigo agrees, only for Ran to suddenly interrupt them and compliments their friendly behavior. The girls begin to make ravish remarks and praise the annoyed Ran; but just when they seem ready to stop they end up infuriating her after making cutesy comments. They express delight after she begins to get worked up. 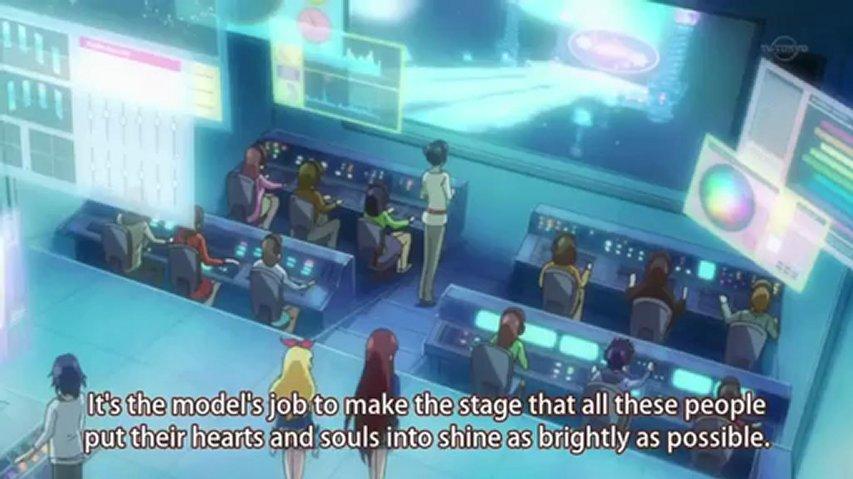