Ichigo gets her first fan letter and decides to find out who they are and what are they like.

Ichigo and Aoi watch a playback of their performance from the other day on the Starlight Academy website and Aoi tells Ichigo that she might have a fan. Ichigo is amazed by this, but at this point the video reaches the part where she fell down and her amazement is quickly converted into embarrassment. Aoi tells her that footage of the performances have to be preserved and it's part of highlighting moments that allow fans to feel closer to their idols though, so Ichigo shouldn't feel so down.

Elsewhere, a young boy was also watching the video of the girls' live-on-stage duo performance. He becomes very impressed by how Ichigo kept her cool during the performance, including when she had her fall.

Later in Johnny's class, he teaches the students about posing with style in front of cameras. Aoi flawlessly posed great, while Ichigo is having a hard time. After class, Ichigo was unable to keep up and Johnny comes up to girls, handing Aoi a fan letter. Reading the letter at a cafe area, it's from a little girl who praised Aoi at in her previous audition. Ichigo understood that, since Aoi danced perfectly, while Ichigo just fell down. Aoi tells her not to worry, as she'll get a fan letter soon. The two girls go to queue up for another audition on a bulletin board and Ichigo wants to apply for a brand new Takoyaki shop. But upon realizing it requires a group of two people, Aoi agrees to join her.

Back in their dorm rooms, Ichigo stretches while Aoi browses the shop's website. Ichigo wonders what she can do to keep herself from falling down in a performance again. Aoi tells her to have concentration and leg strength. So Ichigo goes outside for exercises. But while training, she has an accident and trips up. Just then, the same unidentified boy comes up on her and is surprised to find out it really is Ichigo.

While tending to her injury, the boy tells her to rest it. She asks how he knew her name, causing him to nervously admit he's a fan of hers. Ichigo is very surprised and she asks him why he chose her as his favorite since she isn't well known, nor has she passed any auditions yet. But he tells her that he thought she did really well during her last audition, and he was really impressed that she was able to get back up and keep going after she fell down. As they continue discussion, the boy admits he isn't good at track and wants to give up. But after seeing Ichigo keep trying despite her hardships, it inspires him to do the same. He then admits that he never thought he'd get the chance to meet her in person.

When Ichigo goes on to ask him about his decision regarding track, he instead changes the subject by asking her when her next audition is. She informs him it will be at the Takoyaki shop, then begins to explain why she was out there at the time. The boy wishes her luck in passing the audition, but once again suggests that she also be careful and rest the injury before he heads off. Ichigo quickly stops him though, reminding him that she never found out his name. So, he tells her his name is Oota. Introduced, she tells him to do his best too, then he runs off after she invites him to join her for a run tomorrow.

Later, Ichigo tries to tell Aoi about her morning, but the class bell rings and Aoi hurries to class. After it ends, Aoi tells Ichigo that the idol magazines are going to be released soon, and asks her to go on without her since she wants to wait for it. So Ichigo stretches back in her room, then realized she forgot to tell Aoi about her morning. Aoi comes in at the same time, bringing back the idol magazines and some takoyaki. They decide to try the takoyaki, saying that if it tastes good they'll be able to get jobs with more delicious food. She tries one and absolutely loved its taste, while Aoi also takes a bite and is careful to review its flavoring and details.

When night comes around, a brown-haired girl walks down the hallway when she hears singing nearby. She finds Ichigo and Aoi, practicing their singing. After testing out their voices, both feel confident that they will be great in the morning practice. The brown-haired girl, still listening to them finds their relationship to be unappealing.

While the girls read an idol magazines, Ichigo tells Aoi about what happened in the morning - she finally has a fan. Aoi is impressed, while Ichigo informs her that fans always look on the Starlight Academy website. Aoi asks what kind the fan is, and Ichigo brings up that it was a boy and describes his appearance. She also mentioned her plans to go running with him in the morning. Aoi, curious and wishing to be supportive decides to join.

As dusk arrives, Ichigo and Aoi are at a fountain doing stretches. Aoi has not seen the boy anywhere and Ichigo mentions that she only sees him around the area from time to time. Then someone appears in the mist, revealed to be Oota. They greet each other and she introduces him to Aoi, who he already knows and proceeds to list some facts about her. This impresses Aoi, and Oota explains that a friend in his club is a fan of hers. Aoi then guesses that he's a fan of Ichigo, causing him to blush. He asks Ichigo how she is feeling, and she claims to be fine and wants to start running, so he suggests that she takes the lead and starts slowly. Aoi finds this unnecessary though, given his experience and exercise. Then Ichigo suggests to run with Oota's pace and he thinks that they might not be able to keep up with him, causing Aoi to mention that idols need strength for singing and dancing. When he acknowledges this, they begin to run together.

As Oota continues running, he notices the girls are feeling quite exhausted and asks if they should slow down. But Ichigo, having a flashback of Mizuki's extensive practice, gains a second wind and runs ahead of Oota. Impressed with her determination, he outruns Ichigo, and she continues to run harder.

They stop for a breather near the fountain and he compliments how well she did. He asks how she can keep trying so hard, and she tells him that its because she wants to see how far she can go. She also said that it's a lot more fun to run with Aoi and Oota, then asks if he really plans on giving up track. He said that while he wanted to, meeting Ichigo has made him reconsider and he's decided to stay a bit longer to let his inspiration help him to see how far he will go too. He also had a lot of fun running again and proceeds to ask her when the audition she has to do will be. He brings up that the preliminaries for the track meet is also on that day and wouldn't be able to see the Audition live, so Ichigo wishes him luck and he thanks her.

And so, time passes. The girls continue to exercise and Oota meets his fellow track members and goes running. On the day of the audition performance, the girls wait while Ichigo thinks about Oota's track meet. She really wants him to win and Aoi tells her not to worry, since they need to focus on the audition first and foremost; especially with a lot of people watching them. In this time, Ichigo is reminded of the lesson she learned from Johnny a few days prior: she needs to communicate her feelings with the audience watching her.

An employee comes at the door to remind the girls their audition is about to start. To motivate herself Ichigo begins to eat imaginary Takoyaki and has Aoi do it too, to help them learn how to "covey their feelings". They enter the Aikatsu System rooms and place their card sets on the crests to open a doorway to the stage. They run down the corridor and dress up in the Pink Stage outfit and the Blue Stage outfit before entering the stage. At the same time, Oota overlooks the audition on his mobile phone and returns to running after being motivated to see Ichigo and Aoi on stage.

Ichigo and Aoi start their stage performance, singing and dancing to Idol Activity!

And the conclusion of their performance, the announcer announces that the winners of the the audition is Ichigo and Aoi. Later, the girls return to their dorm rooms. Ichigo gets a fan letter from Oota. It reads that he passed the preliminaries. Ichigo is impressed and Aoi tells her it's thanks to her for cheering him on. Ichigo then says that she and Aoi are able to try their best because they were encouraged by somebody. And in return, they encouraged them as well. Aoi told her that she's now understanding how the life of an idol is. Ichigo is delighted that she's finally got her first fan. But Aoi tells her that her very first fan, is Aoi herself. 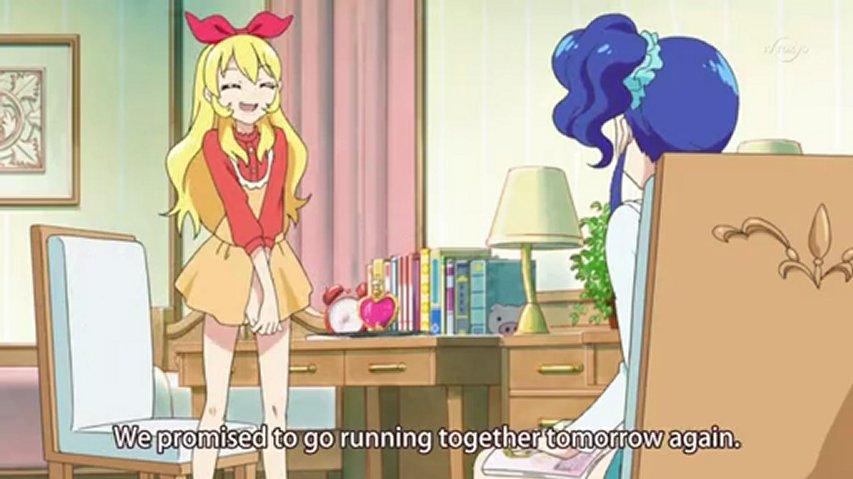 Aikatsu4
Add a photo to this gallery

Retrieved from "https://aikatsu.fandom.com/wiki/Episode_04_-_Oh!_My!_Fan!?oldid=257387"
Community content is available under CC-BY-SA unless otherwise noted.