Aoi starts her job as Mizuki's temporary manager. Meanwhile, a jealous and curious Ichigo tries to follow them without getting caught.

While making tea Ichigo recalls Mizuki's words from the previous evening; she and Aoi won't rise together to the top as friends. Although she took the advice to heart, she remains by Aoi's side.

She comes to their dorm room to find Aoi contemplating the fact that she will have to pick up Mizuki in such a short amount of time. Ichigo reminds her the importance of getting sleep, with Aoi claiming she will be fine. As Mizuki's manager, she needs to know a lot more about her. Ichigo tries to reassure her by saying she already does, before commenting that she would be nervous to work with the top idol. Aoi reaffirms this by pointing out that Mizuki is the top Idol, all on her own, while they are on the very bottom. She also mentions how Mizuki began her career as an idol during her fourth year at Elementary School, starting as a child model. Then she spent a year with no public appearance at all, but she has no idea why that is, other then it being "something very big" for it to have changed her to who she is now. As soon as her hiatus was over she enrolled in Starlight Academy with pristine song and dance skills.

Hearing this causes Ichigo to admit how envious she is over Aoi getting to spend time with Mizuki now, and observes the poster of her nearby while wondering what she does normally. They theorize if she may be covering up a clumsy personality, and wonder if she eats a lot, but Aoi is sure she will find out the next day. Although Ichigo is still convinced that Aoi already knows a lot.

When morning arrives, Ichigo wakes up and proclaims she overslept. She sees Aoi nearby, already dressed and quickly hurries to get ready.

After exiting the dorm they part ways and Aoi starts to think back to when Orihime explained how Starlight Academy also trains managers for the top idol. While Aoi is Mizuki's temporary manager, this is a valuable opportunity to learn what being a top idol truly is.

Aoi arrives at Mizuki Palace, Mizuki's private dorm, and walks towards it while thinking about how much she has heard of this place and how she never imagined actually getting a chance to go inside of it. She enters the house to find that it is about 5 o'clock in the morning and wonders if she must wake Mizuki, only to hear sound nearby and curiously approach. Mizuki surprises her by opening the door first, and as Aoi tries to introduce herself to Mizuki, Honoka Tsukikage, Mizuki's regular manager approaches and speaks to her. Mizuki wishes Aoi luck for today and Aoi observes her as she elegantly walks out of the door. For a moment she is distracted until Honoka snaps her out of it.

Outside of the gates where a van is waiting, Ichigo has disguised herself and hid behind some bushes, determined to hide within it to join them. As she wonders how to go about doing this, she spots a boy sweeping the ground and hides behind him- much to his confusion. She explains the situation to him and he moves towards the back of the van, allowing her to hop inside while questioning her strangeness. Honoka happens to notice him and addresses him as Suzukawa as he shuts the trunk, glancing towards Ichigo while Honoka thanks him. He pretends not to notice Ichigo and the van drives away.

Inside the van, Honoka hands over the daily schedule for Mizuki as Aoi skims through it. To her surprise, she sees a lot of things that Mizuki must do and they arrive at a studio, where Mizuki is escorted by a staff member while Aoi and Honoka go to the back of the van to grab the bags. But when they open the trunk they find Ichigo, causing Honoka to question the sudden intrusion as Ichigo explains that she really wanted to be Mizuki's manager. She asks to join them and Honoka refuses, asking Ichigo to leave until Mizuki approaches to see this going on. She allows Ichigo to be her second manager, having heard the conversation, and even though Aoi won, she finds Ichigo "interesting". She kindly asks Ichigo to help carry the bags- leaving Ichigo happy and Honoka annoyed.

Aoi is rather doubtful over what Ichigo did and expresses suspicion until Ichigo explains wanting to see what Mizuki does backstage and because she really wanted to find out what about her Mizuki finds interesting. Aoi understands and agrees as Honoka comes by to tell them to get to work. They head to the rec room, where they find Mizuki recording a song. Aoi voices her surprise in finding out that the crew records songs so early, and Honoka mentions that they usually don't since it can be hard to sing well in the morning. But Mizuki prefers to do it this way, and they watch as she finishes and earns a few compliments from a man nearby. The girls acknowledge her skills, with Honoka telling them that Mizuki will always give the perfect performance.

They head to another location where Mizuki is a guest star on a news talk show, and the girls watch as they chat about Consumption Tax, and how much feeling she puts into the lottery activity she is requested to do. Later on, she goes out to model for a fashion magazine, then goes to a fan meet and greet event.

From all of these activities, Aoi is able to deduce the Mizuki does everything perfectly. Every single time, as a real prodigy. But Honoka steps in to tell them that she isn't a prodigy, which confuses them.

Eventually, people gather around the Stadium where Mizuki will be performing. In the waiting area, she browses her Aikatsu Card album to choose a coord, then Honoka wishes her to do her best. Before going though, Mizuki hands over her Aikatsu Phone to the girls, asking them to hold it for her. She enters the room with the Aikatsu System and places her card set into the device. She runs through the corridor and appears dressed on stage, where she performs Move on now.

As night begins to set everyone arrives back to the gates of Mizuki Manor. As Mizuki takes off the girls decide to chill for a while at the Gazebo. As they are preparing for bed later, Ichigo suddenly realizes that she held onto Mizuki's phone and forgot to return it, so they head back to the Manor, where they hear music and look to find Mizuki is still awake. Ichigo knocks on the door to find it open, then they peak in to find Mizuki dancing. But not wanting to interrupt her they decide to return the phone later.

In the process of doing this, however, Aoi accidentally knocks over a potted plant, causing Mizuki to find them. She appears exhausted and Ichigo nervously returns her Aikatsu Phone, apologizing for forgetting to earlier. Mizuki thanks them and wishes a good evening to the girls and they resume leaving, only to run into Honoka, who comments that she is aware of how much they look up to her. She decides to tell the girls about Mizuki, starting with how much she trains in comparison to the other students. She also claims that she isn't perfect all of the time.

Aoi is left thinking back to the day when Mizuki suddenly vanished some years back, realizing that her time out of public eye was probably spent on extensive training. Honoka agrees, saying that she has never seen an Idol with such endurance more-so then Mizuki. She then points out that the reason Mizuki finds Ichigo interesting was that she saw a bright potential in her; she was the only girl who was able to use a Special Appeal at her entrance audition. She goes on to mention that for the girls to catch up to Mizuki they have to put more effort into everything they do, even more then Mizuki. Which causes Ichigo to think back to how she thought Mizuki was simply a prodigy when it turns out that she really puts in a lot more effort than one would think in order to become the Top Idol she is now. 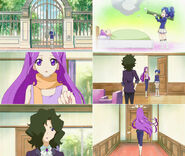 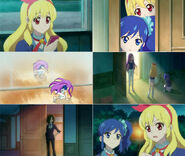 Retrieved from "https://aikatsu.fandom.com/wiki/Episode_03_-_I_Want_to_Know_More_About_You?oldid=255196"
Community content is available under CC-BY-SA unless otherwise noted.