Even if I become an Idol? (私がアイドルになっても?, Watashi ga Aidoru ni Natte mo?) is the premiere episode of the Aikatsu! TV anime series and the 1st episode of its "1st Season" (, "1st Season" lit. "First Year"). The episode aired on October 8, 2012.

Ichigo Hoshimiya is a first-year middle school student who helps out at her mother's bento shop. After accidentally damaging her brothers Idol pictures she enlists her friend Aoi to help smooth things over. After watching said idol perform she leaves with a strong impression that causes her to wonder what her future dream is.

A young girl takes an order from a customer inside Nandemo Bento. She reveals herself to be Ichigo Hoshimiya, a first-year middle school student. As they finish the bento they express how great it came out until Ichigo points out that they have more customers. While working, Ichigo begins a narrative; saying that while she worked with her mother, she never would have imagined that she could of became an idol.

Ichigo returns home later that day and everyone starts cleaning up. It's suddenly that Raichi suggests that she should do something for herself, leaving Ichigo confused until her mother, Ringo, explains how it was always her dream to run a bento shop- but this is not Ichigo's dream, so she should find one. Ichigo claims that she wants to do this though, and how she hopes to one day run the shop with her mother. Noticing how strange Raichi is suddenly acting, Ichigo heads into the kitchen before joining him in their room.

Curiously, Ichigo tries to observe what Raichi is trying to keep hidden. He asks her why she isn't working still, but Ichigo tries to get a better look while claiming she came to bring him juice. Raichi attempts to hide the items on his desk, but in the process of trying to avoid letting Ichigo see, they bump the glass of juice and it spills over the pictures. Raichi begins to panic and tries drying them as Ichigo grabs some napkins and observes them a bit, recognizing them as pictures of the current Top Idol, Mizuki Kanzaki. Ichigo is surprised to find that her brother would like Idols, but Raichi denies everything, focusing on how she ruined his pictures. He goes on to point out that Mizuki isn't just an Idol; she is the greatest Idol. He was really hoping to attend her show but the tickets have already sold out.

Ichigo thinks over his words and begins feeling heavy remorse. But when she remembers how much of an Idol fanatic Aoi, her best friend is, she decides to speak with her the following day in class. She asks her about obtaining tickets for the upcoming Mizuki performance and Aoi expresses surprise since Ichigo never had an interest in Idols before. She agrees to try to help though.

After school, Ichigo brings Aoi home and introduces her and Raichi. Having thought ahead, Aoi reveals some Mizuki merchandise she could spare and gives it to him as a fellow Mizuki fan. Raichi is positively ecstatic by this, and Ichigo suddenly asks why he couldn't just watch the performance on television. Both Raichi and Aoi refuse, stating to her that an Idol performance is better in person; although the concept goes right over Ichigo's head and she doesn't really see the big deal. Aoi then goes on to bring up how difficult obtaining Mizuki tickets are, only to surprise them a moment later by revealing she managed to score three of them through a long, complicated recollection of what she had to do to get them.

That night, while in bed Raichi chats with Ichigo regarding his excitement. She is also excited, although she warns him that they have to get sleep. Raichi is worried he will oversleep, although she assures him that things will be fine. Although she finds herself distracted, wondering why Idols are such a big deal.

When morning arrives the trio head to the concert. They enter the performance area and are given the hearing devices that audience members use, with Aoi explaining how they work. They admire the large stadium and they notice the large crowd, awaiting the arrival of Mizuki. As she makes an appearance her wonderful idol aura fills the crowd with excitement and she starts by performing Move on now!. As the performance goes on, Raichi and Aoi cheer with the rest of the audience members while Ichigo simply stands and listens with amazement.

As Raichi recalls everything with their mother they notice Ichigo has suddenly been put into a daze while sitting by herself. Feeling discontent she excuses herself from the room, thinking about how excited she was while watching Mizuki perform. She had never seen anything like it before, and is unable to calm down.

The next morning Ringo arrives home from the grocery store to find Ichigo and Raichi watching the playback of the performance. Ichigo walks off to help her, claiming that if she had asked to come she would have before returning to the video. Noticing her strange behavior, Raichi voices how happy he is that she joined him.

Suddenly, Aoi bursts into the Hoshimiya household and tells Ichigo the same thing, handing over a guide book for an Idol school. Raichi notices the book is about Starlight Academy and Ichigo is quick to ask questions, with Aoi explaining to them that Starlight Academy is Japan's number one idol school and how all of the students who attend it are active idols. They have lessons every day using the Aikatsu System; which is a series of Cards and the key to any performance. All idols in the world uses the Aikatsu Cards and they can choose how to look on stage. Students partake in "idol activities", and points out how "Aikatsu" is the combination of those words due to their importance.

Raichi goes on to bring up how Mizuki attends this school, observing a picture of her in the uniform. Aoi also points out that Mizuki is the current Top Idol of the school, and brings up how the entrance exam is approaching and she plans on taking it. This impresses Ichigo, although she is sad knowing Aoi will get in and she would be left behind. To her shock, Aoi brings up her desire to have Ichigo join her, explaining that Ichigo has a natural Idols scent to her, and she is sure they would have a lot of fun.

Later the Hoshimiya's sit down for dinner. Ichigo is distracted with her thoughts however, which Ringo notices. Raichi expresses his thoughts on her interest in becoming an idol, although Ichigo quickly dismisses the idea before he can determine if she actually wants to do this or not. Then she resumes eating dinner, leaving her brother and mother to express concern.

As Ichigo lingers in her room she thinks about being an Idol again. She thinks it would be a lot of fun, but she recalls her desire to run the Bento Shop with her mother. It's then Ringo comes by and tells Ichigo that she should do what she wants.

The next day, Aoi and Ichigo goes to perform "special training" for the entrance exam. They practice putting on a performance and get plenty of exercise. While it is a little difficult, Ichigo expresses joy in having finally gained a dream to call her own, but she is still hesitant as she doesn't know if she can do it or not.

Eventually the Entrance Exam comes along. Ichigo and Aoi stand in a long line of applicants for the exam and while there, Aoi happens to mention how difficult she heard the exam is. In hopes of keeping them focused, Ichigo attempts to raise their spirits as they head inside.

Resuming her narrative, Ichigo explains the procedures in the entrance exam, including a test and interview portion.

Soon they realize how well everyone has been doing so far and Ichigo grows anxious again. Aoi keeps her encouraged by saying that she was meant to become an idol, then informs her that it is time for the final part of the audition. She tells her to do her best and they step into separate empty rooms, where Ichigo observes a small table where cards reside. A voice instructs to choose three cards from the table, and once Ichigo chooses a set she likes the most, she heads to the door in the middle of the room.

In there she finds a booth at the opposite end of the hall and places the cards into the machine, causing it to light up and open the doors. Before she steps inside, Ichigo gives herself a last second of encouragement and suddenly finds herself on a colorful stage, where she performs the song Idol Activity!.

At the conclusion of her performance, Mizuki, who is among the judges, notes that she was amazed to see how fast Ichigo was able to perform a Special Appeal. Not many new applicants can pull that off.

With that, Ichigo and Aoi turn their attention to the announcement screen and look to see that only ten girls have been accepted. They are very delighted to find out that they are two of the ten, but unknown to them a student is behind a corner observing them. The mysterious girl comments that while the girls passed together, they only have a short time to remain friends before she walks away.

The three to Mizuki's performace.

Ichigo gives a solution for Raichi. 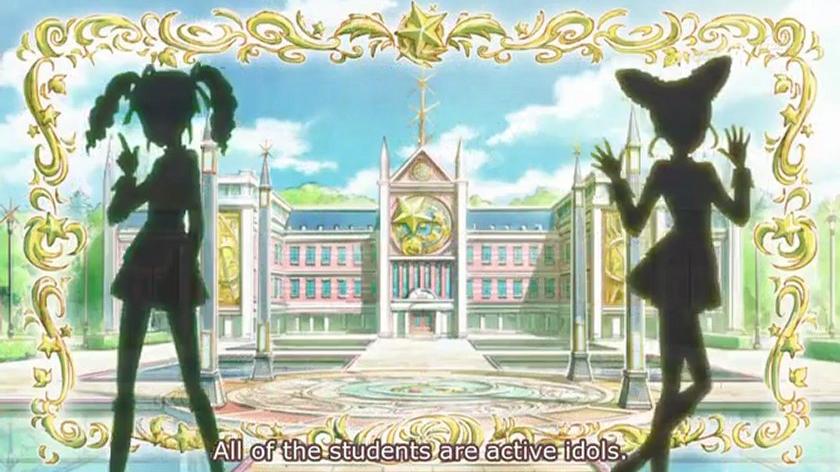 Aikatsu! Episode 1 sub
Add a photo to this gallery

Retrieved from "https://aikatsu.fandom.com/wiki/Episode_01_-_Even_if_I_become_an_Idol%3F?oldid=255362"
Community content is available under CC-BY-SA unless otherwise noted.