A glittery dark blue top with violet bunched fabric around the top of the chest and left shoulder. Around the bottom is a gold band, followed by a layer of dark indigo frills and sheer glittery violet fabric. At the middle of the chest is a pale pink ruffled ribbon with hot pink leopard print and two chains beneath it, one made from gold links, the other a rainbow of gems. On the ribbon is a shimmering, ruffled purple cloth and a gold, pearl studded square with a garnet diamond at the center. Beneath each shoulder is a chain of violet, purple, and white roses.

A shimmery purple semi-ruffle with a gold band around the bottom and trim of dark indigo frills. Over the skirt are three pleat, glittering dark blue peplum layers, the top covered in violet, white, and purple roses, while the bottom two are split at the middle. The waistband is gold with the ornament from the ribbon at the center, surrounded by a rainbow of square-shaped gems. Sewn to the back is a large semi-ruffled leopard print ribbon.

Fuchsia sandals with silver lining and glittery dark blue fabric covering the foot and lower leg, with the toe and heel exposed. The bottom is trim with pale pnk ruffles, while mauve ruffles are sewn to the top with a tulle scallop in the center. A leopard print ribbon is sewn to the back of the ankle, and on the foot is the ornament from the belt and chest ribbon. Around the leg are two chains held by a gold stud, the top is plain link, while the second is adorned by a rainbow of gems and gold pearls. A gold thigh accessory is included with a rainbow of square-shaped gems adorning it.

A glittery purple crown with black detail and a garnet gemstone sitting on top. The base is made from the pale pink leopard print fabric and adorned by a purple and hot pink striped bow on the corner, adorned by an amethyst gem on a gold base. A rainbow of gems are placed inches apart above the base. Gold pearl earrings are included, with pearls lining the square-shaped ornament at the bottom and a ruby diamond placed at the middle.

The activated wings or aura behind the idol is a dark purple scalloped frame with a rainbow of gems spread three scallops each. A chain wraps around the corner of the frame, with a large colorful gem on top surrounded by two smaller gems and dangles beneath them. 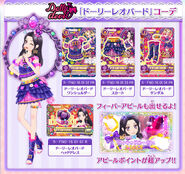 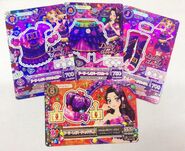 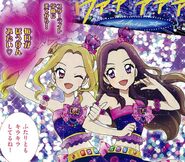 Retrieved from "https://aikatsu.fandom.com/wiki/Dolly_Leopard_Coord?oldid=256686"
Community content is available under CC-BY-SA unless otherwise noted.