Cosmos (コスモス, Kosumosu) is an idol unit consisting of Ichigo Hoshimiya and Akari Ōzora. The unit was formed in Episode 178.

After Soleil and Luminas' joint concert, Ichigo reminds Akari that the following day is Akari's birthday and that Ichigo has prepared a present for her. Not wanting to give Akari her present so easily, Ichigo organizes a race between the two of them throughout the city. Ichigo has a slight lead for most of the race, but Akari manages to catch up while climbing Angely Mountain. She reaches the top before Ichigo does and helps her up.

Admiring the view, Ichigo reveals she hasn't actually come up with a present and asks Akari what she wants. The two are then seen having a concert at Starrise Stadium, as the unit Cosmos. 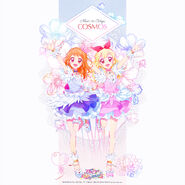 Add a photo to this gallery
Retrieved from "https://aikatsu.fandom.com/wiki/Cosmos?oldid=259300"
Community content is available under CC-BY-SA unless otherwise noted.