Clara Carol Coord (クララキャロルコーデ, Clara Carol Coord) is a premium rare story coord by the pop brand Vivid Kiss, which follows the story of the The Nutcracker. It debuted in Part 2 of the Data Carddass Aikatsu! 2015 series and in Episode 114 of the anime.

A gold blouse with stripes of red, orange, purple, lime, and light blue. The collar, beneath the chest, bottom of the sleeves, and torso have pieces of ruffled fabric held by red ribbon, and at the middle of the torso is a red knotted ribbon. Sewn to the left of the chest are Christmas decorations composed of a gold star, a purple sphere, candy cane, and holly berries with two silver chains beneath them. A red choker with the story emblem hanging from it is included.

A skirt matching the top with the same trim and a knotted red bow on each corner of the hem adorned by Christmas ornaments or a gingerbread man. Beneath this is a layer of white ruffled fabric covered in drawings of stars, holly berries, candy cane, and blue snowflakes. The waistband is orange, and the story emblem is sewn above the front left bow.

Gold heels with rainbow ribbon over the foot and ankle, held by a gold star. White knee-socks are included with the designs from the white skirt, and they have a ruffled, two-layer cuff held by red ribbon tied into a bow at the middle.

An orange headband with a rainbow striped bow adorned by a snowflake, candy cane, a purple sphere, a large gold star, a tiny sky blue star, and a tiny green sphere. Alternate silver earrings are include, one has a diamond on the bottom, beneath a purple sphere, while the other has a pearl chain attache to a garnet star. 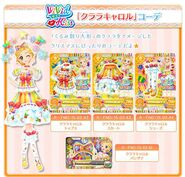 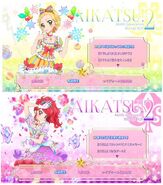 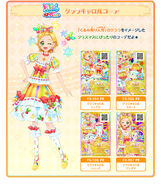 Add a photo to this gallery
Retrieved from "https://aikatsu.fandom.com/wiki/Clara_Carol_Coord?oldid=257827"
Community content is available under CC-BY-SA unless otherwise noted.