British Blue Coord (ブリティッシュブルーコーデ, British Blue Coord) is a normal coord made by the cool brand LoLi GoThiC. It debuted in the promotional collection of the Data Carddass Aikatsu! series and made a cameo appearance in Episode 82 of the anime. It shares its design with the British Coord and the British Ivy Coord.

A white elbow-length blouse with ruffled collar and sleeve held with a blue band. The torso has a black vest on top of it lined in silver with light blue string on the torso. On the sides are blue and silver lined print. Ruffled material of white rests at the center of the chest beneath a blue bow, while pinned to the left is a gold Fleur de lis surrounded by small stones on a silver circle.

A black skirt with a pattern of silver Fleur de lis to match the lining on the bottom. Stripes of blue and light brown alternate with this pattern, lined entirely in white. A matching striped cloth wraps around the waist with a pocket watch hanging with three silver chains and a row of sky blue gems on the bottom chain.

Black boots with the top lined in gold and a dark grey sole. White ruffles stick out from the top of the boot, while four white straps adorn the leg. A flap of blue is on top of the foot to match the coloring on the heel of the foot, lined in yellow with white frill trim. A large, black Fleur de lis symbol is designed on top of the material.

A black headband with silver designs on the tip of each horn. 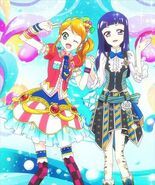 Add a photo to this gallery
Retrieved from "https://aikatsu.fandom.com/wiki/British_Blue_Coord?oldid=225196"
Community content is available under CC-BY-SA unless otherwise noted.