Aikatsu! Mascot Collection (アイカツ！マスコットコレクション, Aikatsu! Mascot Collection) is a Gashapon product similar to Aikatsu! Accessories Collection, but contains mini-keychains whilst the Accessories Collection contains accessories. Along with the keychains, there are also one mini promotion cards comes with each keychain. The characters are Ichigo Hoshimiya, Aoi Kiriya, Ran Shibuki, Mizuki Kanzaki, and Angely Bear (which in the card replaced with Ichigo). The collection released on June 2013.

The participation of Angely Bear also may the part of it's promotion as the collection released near Episode 32's airdate. Unlike the usual accessories cards which are typeless, these promotion cards have each type on their own.

In June 2014, Series three was released. It featured Ichigo, Mizku, Sora, Maria Himesato, and Mikuru Natsuki in coords from their brands. 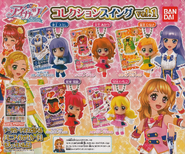 Add a photo to this gallery
Retrieved from "https://aikatsu.fandom.com/wiki/Aikatsu!_Mascot_Collection?oldid=135478"
Community content is available under CC-BY-SA unless otherwise noted.