Aikatsu! (アイカツ！, Aikatsu!) is the anime adaption of its original arcade collectible game, Data Carddass Aikatsu!. The series is produced by the 9th studio of Sunrise, Telecom Animation Film, and BN Studios, and began airing on October 8, 2012.

The second season which is produced by Sunrise's 5th studio, was confirmed along with the arcade game "2014 Series" and began airing on October 3, 2013.

Season 3 was confirmed along with the arcade game's 2015 Series and began airing on October 2, 2014, with Akari Ōzora replacing Ichigo as the protagonist.

Season 4 was confirmed along with the arcade game's 2016 Series and will begin airing on October 1, 2015.

In mid-September, Aikatsu! was green-lit for release in Indonesia and is slated to premiere there October 20, 2014 along with the DCD Collection. On the other hand, Aikatsu has been airing on Indonesian TV Network RCTI since September 20, 2014.

A while after the second season started, South Korea had their Korean Dubbed Version of Aikatsu! premiere on October 7, 2013. The cards are released in packages with cards mixed from numerous rarities, brands and collections.

Beginning from October 17, 2014, Taiwan has aired their Taiwanese Dubbed Aikatsu! on YoYo TV, and gained popularity from the country, so as having their version of the DCD game and collection released.

Reruns of Aikatsu! have been aired on Tokyo MX from April 11, 2020 onward.

Ichigo Hoshimiya was an ordinary middle schooler who worked at her mother's bento shop. One day, after attending an idol concert (featuring Mizuki Kanzaki) with Aoi Kiriya (her best friend who has a dedicated knowledge for idols), and Raichi Hoshimiya (Ichigo's little brother), Ichigo was left with a huge impression to become an idol. Later, Aoi told Ichigo that she is going to enroll in a school known as Starlight School (a female-only school dedicated in training girls to become idols) and suggests that Ichigo should enroll with her. Soon after taking their respective entrance examinations and getting accepted into the academy, Ichigo begins her life as an idol-in-training.

The series itself primarily focuses on Ichigo's journey to become a famous idol. She goes through the desire to become an idol while going through hardships of distrust.

With the rise of the new idol school, "Dream Academy", Starlight School has been placed in a predicament! With large rookie idol with perfect pitch "Seira Otoshiro", and producer-in-training Kī Saegusa, Starlight Academy will start facing new rivals which appear one after another, multiplied by the rivalry to take the seat of top idol! The girls driven into Idol Activities with overlap, encounter, and interact with new rivals. Ichigo and the others' Idol Activities will continue to go on! [1]

This season marks the end of the central protagonist, Ichigo Hoshimiya and the first generation and the beginning of the second generation. Middle school first year, Akari Ōzora is now the new central protagonist and along with her new friends, Sumire Hikami, the "Blooming Ice Flower of the Stage", and veteran idol Hinaki Shinjō, they will continue to do Idol Activities together and succeed in their senpais' footsteps!

Deciding to embark on a new journey, the girls of Luminas hop onto the Aikatsu! Wagon and hold a nation wide tour around Japan. Along the way, they encounter various idols coming from different areas of the country. In Hokkaido, they meet Nono Daichi and Lisa Shirakaba, two average girls, and inspire them to become passionate Aikatsu! idols at Starlight School.

Aoi Kiriya is Ichigo's best friend who has a great knowledge for idols. Since she was a child, Aoi was intrigued with idols, she watches them as a hobby. Eventually, she becomes an expert in knowing idols.

Ran Shibuki is a lonesome student of Starlight Academy and one of Ichigo's classmates. She often oversees the friendship between Ichigo and Aoi and knowing that the two won't be friends for long.

Mizuki Kanzaki is the number one idol and top role-model in Starlight Academy, who is a year above Ichigo. She started off as an elementary model then mysteriously disappeared from the public for a whole year and came back as a student in Starlight Academy. Mizuki doesn't show her hard-working side to many people and is thought of as a genius. She is highly idolised by Ichigo and inspired her to enroll into Starlight Academy.

Otome Arisugawa is a bubbly girl who is in a different class from Ichigo. She admires cute and pop things including popcorns, cats and rainbow, and is best known for her catchphrase, "Love You!". Even though Otome is a bit of a klutz like Ichigo, she fears that she will make a mistake during the real thing. Therefore, Otome practises for jobs at least a year beforehand. Otome is very hard working and performs shows with all her heart.

Yurika Tōdō is Otome's classmate who is self-called "vampire over 600-year-old". She generally walkes around with an umbrella to shield her from the sunlight. Outside of the public eye, however, she is a more plain girl who is addicted to vampire romance manga and wants to use the settings to make her stand out, which only Ichigo and her friends know of. Contradictory to her character, she likes garlic-flavoured ramen.

Her name is Sakura Kitaōji, like Ichigo, she was inspired by Mizuki to become an idol. She comes from a famous kabuki troupe family "Kitaōji Theater", and as such she has the genetic habit of breaking into theatrical performance when reminiscing about things. She is one year younger than Ichigo and was her mentee when she first arrived in Starlight Academy.

Kaede Ichinose is a transfer in Starlight Academy to become Mizuki's partner in Tristar. A returnee from America who is a commercial model of her father's American sushi chain "Kaede Sushi", she came from America and uses a lot of English phrases. She has a habit of kissing people she meets on the cheek. She also can do magic and enjoys performing various tricks.

Aikatsu! in Other Languages

Please cooperate with us by not spamming this section. This section is solely for official videos like TV ads or promotional videos. 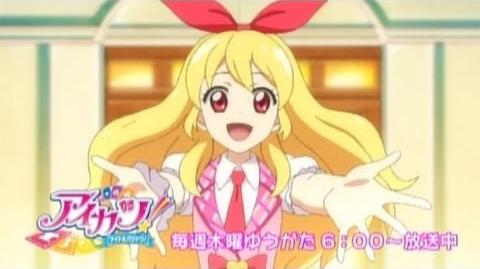 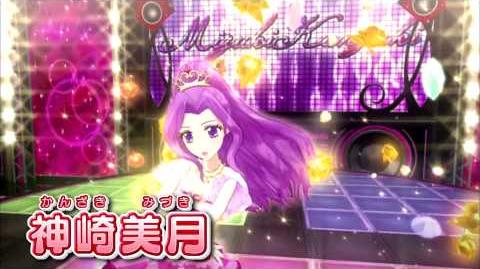 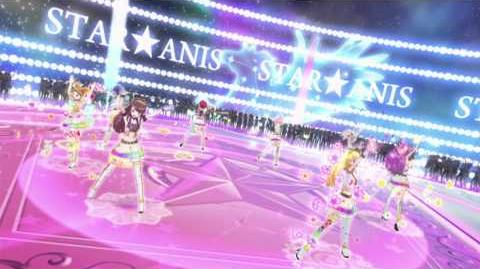 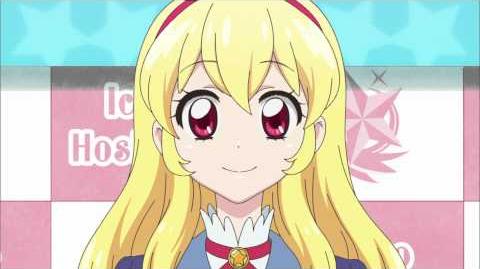 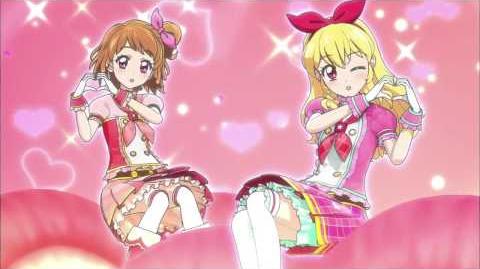